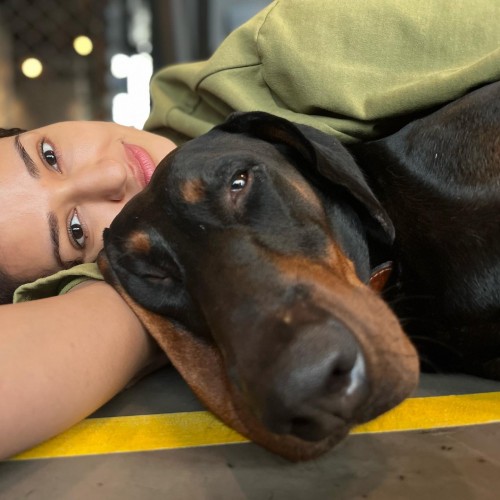 Pictures of Disha Patani and her dogs Bella and Goku

After making her acting debut in the 2016 film MS Dhoni: The Untold Story, Disha Patani hasn't looked back. She has a strong social media presence thanks to her stunning looks and electrifying dance moves. She has shown to be a pet lover, a pet parent, and an avid pet owner, owning two dogs- Bella and Goku, and cats- Jasmine and Keety. Her Instagram account is regularly updated with pictures of her with them.

A few hours ago, the actress uploaded the cutest pictures of her pets to her Instagram stories that highlight her love for them. The actress has been pictured posing with Bella and Goku in one of the pictures. During the second photo, Disha can be seen lovingly kissing her dog, while the other one comfortably lies next to her. Finally, in the last photo, the actress can be seen smiling for a photo with her adorable pooch Bella.

In other work related news, the actress most recently appeared in Radhe opposite Salman Khan. Additionally, Jackie Shroff, Randeep Hooda, and Gautam Gulati played pivotal roles in the film. In the coming months, she will star in Ek Villain Returns, under the direction of Mohit Suri. It is the sequel to the 2014 release, and also stars John Abraham, Arjun Kapoor, and Tara Sutaria in lead roles, and is set for global release on 8 July, this year. Meanwhile, Disha will star alongside Sidharth Malhotra and Raashii Khanna in Karan Johar's Yodha. It is set for release on 11 November 2022.