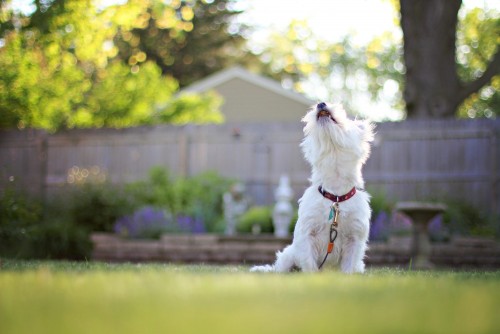 What Does My Dog Bark Mean

Dogs can communicate a variety of messages, including warning us of danger.

Since dogs were welcomed into our homes they’ve been communicating with us using a range of barks, yelps, howls, growls and whines. Trying to decipher their messages can sometimes be difficult but it’s about trying to interpret the sounds your dog is making while reading their body language, too.

Humans have an intricate way of communicating with each other. Not only do we have written communication, but we have spoken communication, which is supremely powerful and effective. Dogs have their own system of communication too, of course, but it differs vastly from ours. Dogs communicate with us and other dogs through their barks, whines, body language, and growls. But most people are intrigued by their bark, as the significance behind each bark is elusive. Since we cannot understand our dogs’ common method of communication, we are left to wonder: What do these barks mean? Can these barks be trained? Can they be controlled?

A dog’s primary communication is first through scent, then body language, and then his vocal sounds such as barking, growling and whining. In the wild, dogs bark to call the pack together, alert each other to danger or to a delightful food find. Dogs living with humans quickly figure out that communicating to us through scent is useless — we’ll never appreciate the detailed messages embedded in urine on a fencepost. So our dogs speak to us through body language, because we understand it fairly well, and through barking, because it definitely gets our attention.

Let’s look at the possible reasons your dog is barking.

1. Dog barks to communicate with people.

The dog bark is a sound that dogs make to communicate with their owners. Dogs use barking to express different emotions, including excitement, fear, anger, and playfulness. In addition to communicating with humans, dogs also use barking to alert each other about potential dangers.

2. Dogs bark when they feel threatened.

No, dogs do not bark when they feel threatened. When a dog barks at something, it's because he wants attention. He may have been feeling threatened, but if he feels safe again, he'll stop barking.

3. A dog may bark if he feels lonely.

One of the most common complaints of pet parents is that their dogs are disruptive or destructive when left alone. Their dogs might urinate, defecate, bark, howl, chew, dig or try to escape.

4. If a dog barks continuously, it could mean he wants attention.

Excessive dog barking can disrupt your ability to concentrate. Noise produces a change in your stress hormones, which consequently will alter many physiological and psychological functions. For example, a startling noise will not only set your heart pumping faster, it will also make you loose focus and concentration.

6. Sometimes a dog barks to warn others about danger.

It is natural for a dog to bark when someone is a the door or when strangers pass the house or car. Many dogs will bark if they sense some type of threat, proclaiming "I'm here protecting this place so don't mess with me." The sound of this bark is usually sharp, loud and authoritative.

7. A dog may bark when he sees someone coming home.

Dogs bark at people for a variety of different reasons including because the dog is excited, frustrated that they can't greet the person, or even worried or uncomfortable about the person's presence.

8. When a dog barks, it's a sign that something is wrong.

Dogs' sense at noticing subtle shifts in behavior comes in handy when our emotions take a nose dive. The people around us might not notice when we're feeling sad or sick, but dogs do. Slumped shoulders, fragile movements, and immobility are all things your dog notices, and once they do, they come to provide comfort.

9. If your dog barks excessively, it could indicate that he is sick.

10. Your dog might be trying to tell you something.

Generally, one bark is to alert. Multiple barks mean he is trying to tell you something – anything from hunger to needing attention. Yipping or whining – A pup usually yips or whines when he is uncomfortable or lonely. You will probably notice yipping as you leave or when you put him in his crate.

11. If your dog barfs frequently, it could be due to illness.

Vomiting may be due to a minor intestinal upset, and can be caused by intestinal parasites or from dietary indiscretion: eating table scraps, garbage, spoiled food, or foul-tasting things such as certain insects.

12. A dog who barks incessantly could be bored.

Boredom barkers will bark continuously and may also exorcise their frustration on your flower beds. To tackle boredom barking you should start by ensuring that your dog is receiving enough exercise. If you take your dog for a good walk in the morning they will be more likely to rest until you come home.

13. An overly excited dog may bark.

Dogs bark when excited just as children shriek or squeal when they're enthusiastic about something. Since dogs don't have the words to communicate their emotions, they must rely on their vocalizations as a way to express themselves.

14. A dog who barks excessively could be hungry.

Dogs yap when they're hungry, too. You'll know your dog is hungry when the barking is continuous and maintains a steady pitch. According to our expert, this is the dog expressing to you to intercept their woofs with positive attention with food or treats.